The UK government and UK Statistics Authority (UKSA) announced their response to the consultation on the reform to RPI methodology. There were two aspects to the reform announcement:

RPI is the oldest measure of consumer price inflation in the UK and as such is widely used, but it has long been recognised that RPI is constructed using flawed methodology. This so called ‘formula effect’ has contributed to the difference between the RPI and the Office for National Statistics’ (ONS) preferred measure of consumer price inflation CPIH. As show on the graph below the historical difference between CPIH and RPI, called the wedge, has been averaging about -1% in the past decade: 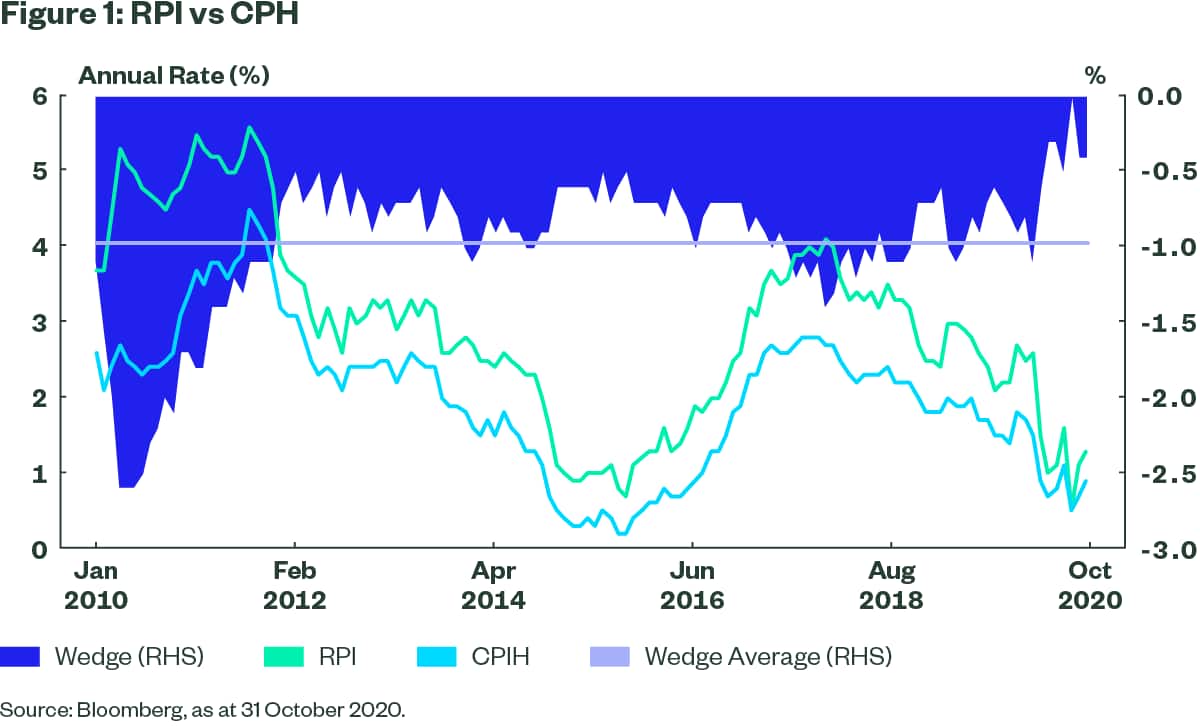 Following the publication of the House of Lords’ RPI report in January 2019, the UKSA, responsible for the production and publication of official statistics in the UK, made a proposal to address RPI shortcomings in March 2019. If the proposal were to be implemented before 2030, the Statistics and Registration Service Act 2007 required the Chancellor to consent. The Chancellor did not provide his consent in September 2019, and instead opened the question up to the public in a consultation that focused on the when (2025 to 2030) and the how of the proposed change. The consultation was launched in March 2020 and extended due to Covid-19 until August 2020.

The outcome of the consultation of using the CPIH methodology within the RPI from 2030 onwards directly impacts Defined Benefit schemes on two fronts: not only does it reduces liabilities linked to RPI but it also adversely impacts assets linked to RPI such as index linked gilts used to hedge those liabilities.

The price action observed yesterday can be summarised into three areas:

Below we show yesterday’s closing levels relative to the prior day’s levels:

We continue to see inflation strengthen this morning and it is trading at a significant premium to the ‘fair value’ level that is implied by the Bank of England CPI target of 2% and the difference between CPI and CPIH (typically around 10bp).

It is important to remember however that the inflation market historically has not been perfectly efficient, with inbuilt supply and demand imbalances which have always resulted in RPI trading at a premium to fair value. The question now is whether the current levels can be sustained or if they are overdone. We feel that in the very near term, lack of supply into year-end could present liquidity issues, particularly if we see a pickup in LDI hedging demand. However, looking into the new year we feel prices could correct somewhat and inflation cheapen from current levels. This may be further supported by the possibility of an index-linked gilt syndication which has not happened in over a year.

Furthermore, the impact for DB schemes is not limited to index-linked gilts or RPI swaps in traditional matching portfolios (for example, RPI may be referenced in alternative assets such as UK property). It is important to understand how the proposed change to RPI affects your entire pension scheme and its implications on your journey plan. Trustees should look at their renewed funding positions with Scheme Actuaries, Consultants and their investment managers matching their LDI portfolios.

The views expressed in this material are the views of Danielle Bowkett and Daoyu Chen through 30 November 2020 and are subject to change based on market and other conditions. This document contains certain statements that may be deemed forward looking statements. Please note that any such statements are not guarantees of any future performance and actual results or developments may differ materially from those projected.