What the US Election Could Mean for Policy and Portfolios

• If the election produces a blue sweep, we expect a significant policy regime shift
• Policy changes would likely include higher corporate taxes, a stronger regulatory environment and a return of antitrust supervision
• Immediate policy actions would likely be quickly priced in this year and create temporary pressures

In the first half of 2020, investors had plenty of things to think about, and the upcoming US election understandably took a back seat—but now that the election is less than 100 days away, investors are paying closer attention. Members of our research team recently gathered to share their perspectives on potential post-election policy changes and to consider the implications for investors’ portfolios.

Risk assessment: Conceptualizing election outcomes
When we think conceptually about US elections, outcomes typically fall into two categories, as shown below. First, there can be a resulting shift in policy that creates beneficiaries in specific industries. A new administration, for example, could be a bit “greener” than the previous one, which would benefit renewable-energy companies. The second type of outcome results in a broader regime shift in policy and creates marketwide ripples.

There is also a third category of Macro Systemic changes—one not usually seen in developed market elections but that lies within the realm of possibility for this year’s US election. Outcomes in this category create big swings that result in an ideological shift that cascades through the full policy framework, creating an immediate impact on asset prices and a long-lasting effect on the economy that reaches beyond the new administration’s term. Currently, we are less concerned about this year’s US election landing in this category; however, it is a tail risk that we continue to monitor. 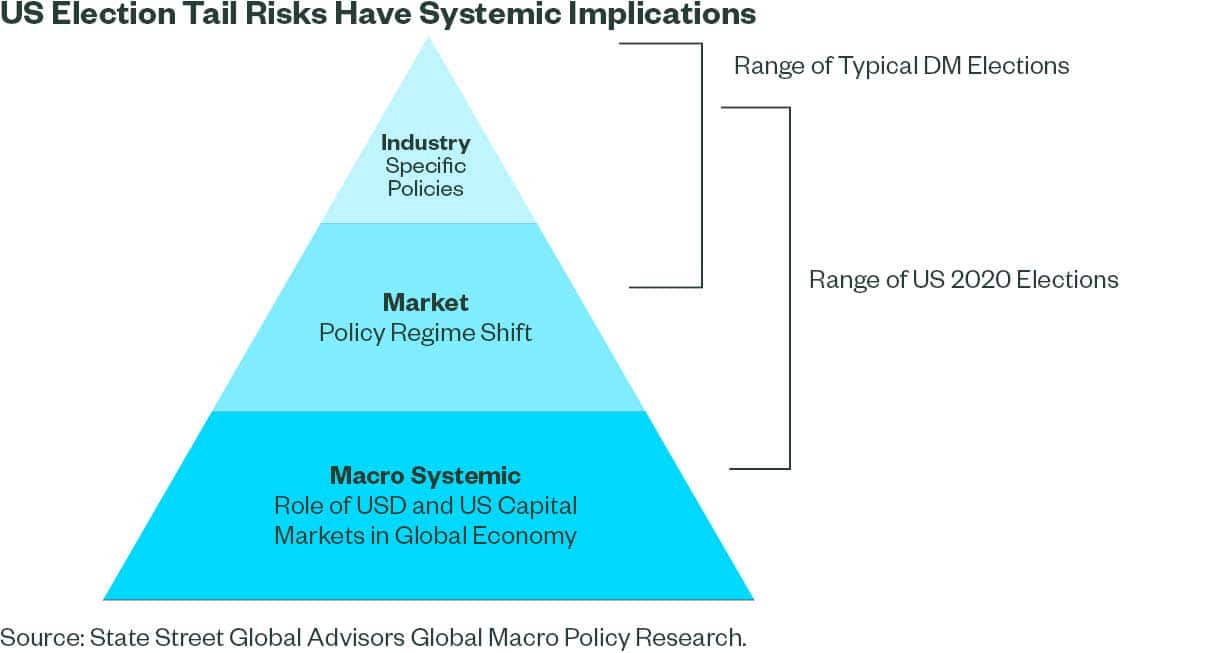 Where do we stand? Considering the election scenarios
We divide the various election outcome scenarios into two broad camps: a confirmed winner or a disputed winner, as shown below. The worst-case scenario would be a close, contested election where markets face prolonged uncertainty around the presidential winner. Uncertainty would likely spill over into capex decisions for firms and create real economic consequences. As indicated below, though, current polls make this scenario seem unlikely; the more likely scenarios feature a relief rally on the back of increased clarity. 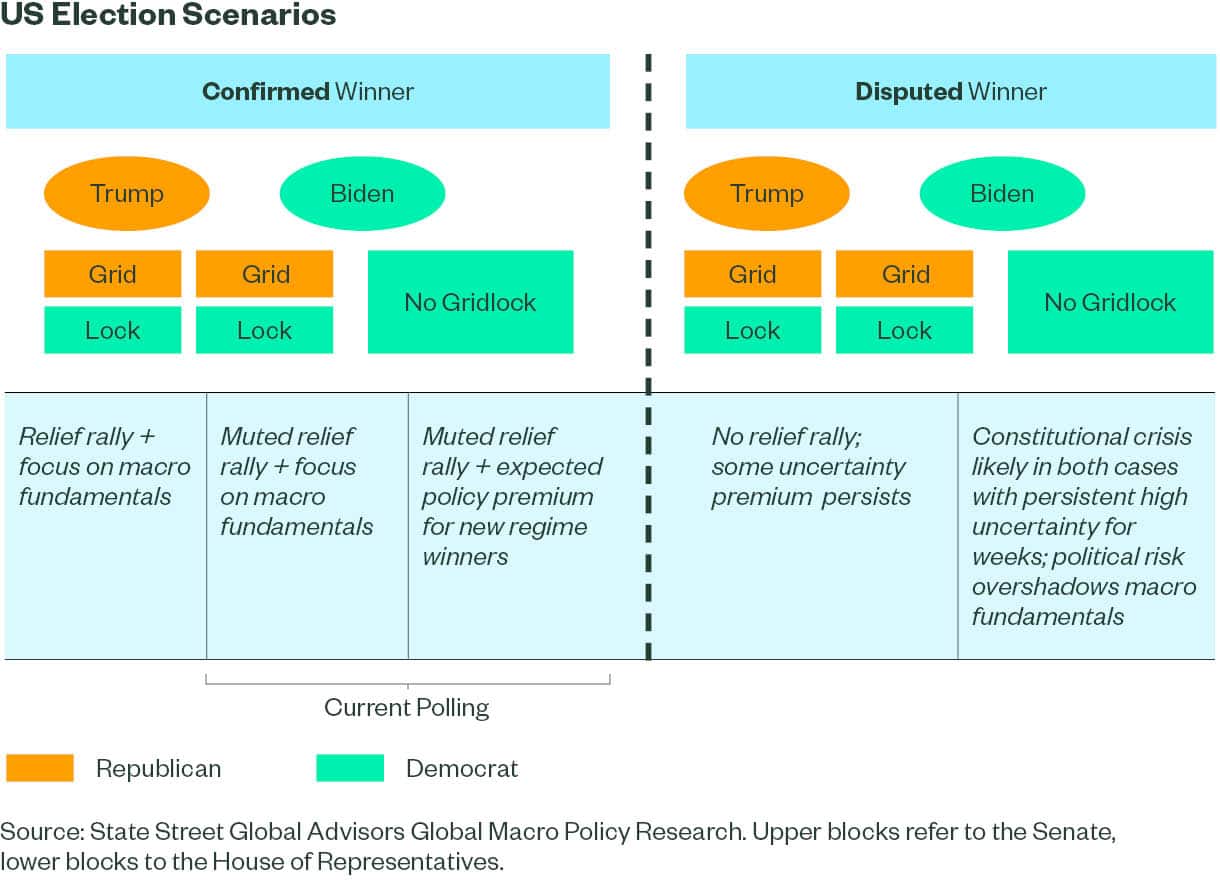 If the election were to produce a so-called blue sweep—whereby Joe Biden wins the presidential race and the Democratic party grabs a majority in both the Senate and the House of Representatives—we would expect to see a significant policy regime shift. As shown below, we think of Trump as having overseen a “beta” regime that was broadly supportive of equities and the corporate bottom line. Wealth has been transferred from the government to corporate balance sheets, paid for with higher deficits. The Trump beta regime is also characterized by less antitrust enforcement, allowing oligopolies and monopolistic pricing to continue. In sum, this regime has widened margins, benefiting shareholders across the board.

A blue sweep would usher in what we are deeming an “alpha” regime, characterized by a wealth transfer from corporate balance sheets to households via the government. Features would likely include higher corporate taxes, a stronger regulatory environment for businesses and a return of antitrust supervision. The Biden alpha regime would also likely feature a sincere public spending effort to support household income and get the economy going again, underpinned by a significant infrastructure component.

Notably, current proposals from the Biden team include talk of raising capital gains taxes on high earners. We believe such a change would substantially dampen demand for financial assets, particularly equities, given that high-income earners hold a meaningful portion of US stocks.

Would a blue sweep turn the trend in US equities?
To evaluate the strength of the US equity market and its durability heading into the election cycle, our team discussed the chart below. It illustrates how the US share of the global stock market has grown to reach approximately 60%, a stark figure, considering that the US accounts for roughly 5% of the world’s population.

At this record-high level, are US equities more vulnerable to a correction in absolute and/or relative terms? If investors aren’t pricing in a blue sweep, there may be risks. We believe that immediate policy actions after a blue sweep—such as an increase in corporate and capital gains tax rates—would be quickly priced in this year and create temporary pressures. The longer-term trend would likely resume based on the power of the underlying businesses and economic dynamism in the US markets. If, however, we are faced with a disputed election and the tide is tipped into a US dollar bear market, making the US less amenable for investors, we would expect this chart to make a meaningful downward move.

A closer look at the effects of a blue sweep on tax policy
Our team took a closer look at potential changes to tax policy and estimated that a blue sweep could lead to an approximately 8% to 12% hit to the earnings of the S&P 500® Index, which markets will likely discount swiftly. If cuts enacted under the Trump administration’s Tax Cuts and Jobs Act (TCJA) are rolled back, we would expect companies with a high degree of domestic sales and earnings to take the biggest hits, including:

The TCJA also eliminated prior tax disincentives on the repatriation of foreign earnings. Since the law took effect, many US nonfinancial firms with large holdings of cash abroad have deployed repatriated funds for stock buybacks.1 If a blue sweep results in changes to the repatriation tax framework, the pace of buybacks may diminish, possibly curtailing what has been a meaningful tailwind for equities.

How the health care sector may react
Given investors’ increasing focus on the health care sector amid the COVID-19 pandemic, our team also took a closer look at this topic. Overall, a blue sweep would be a clear negative that is not currently priced in, which would lead us to expect a material pullback in health care equities. That said, Biden is not as feared by investors as past Democratic candidates because of his commitment to building on Obamacare, albeit with a public option—a component that makes some investors nervous. If Biden’s pick for a running mate is a strong advocate for “Medicare for All,” then the sector could be immediately impacted by concerns over the long-term implications of a public option. We would expect pharmaceuticals, biotechnology and managed care companies to be particularly affected.

This is an increasing risk for investors to watch. As we enter the second half of the year with a modest underweight to equities, the impact of election risk is becoming a larger consideration. One of the lessons learned from the 2016 US election is that polls don’t tell the complete story, but will influence how the market perceives possible outcomes.

S&P 500 Index
A popular benchmark for US large-cap equities that includes 500 companies from leading industries and captures approximately 80% coverage of available market capitalization.

The views expressed in this material are the views of Daniel Farley through the period ended July 30th, 2020 and are subject to change based on market and other conditions. This document contains certain statements that may be deemed forward looking statements. Please note that any such statements are not guarantees of any future performance and actual results or developments may differ materially from those projected. Investing involves risk including the risk of loss of principal. Past performance is no guarantee of future results.