Following a rebound off 2018 levels in the first half of 2019, the escalation in the US-China trade dispute looks set to dominate headlines and weigh on global and emerging markets (EMs) in the short term. However, the change in policy stance by the US Federal Reserve (Fed) and the fiscal stimulus in China are creating conditions for better growth in EMs toward the end of the year, despite continued strength in the US dollar for now.

So, if the tit-for-tat trade tariffs do not escalate further and the US and China reach a deal, we could see EMs recover. Pressure remains on both sides to reach an agreement, despite a lack of trust between the parties. China must deal with its high levels of corporate leverage or face becoming the next Japan, while US President Donald Trump will want to avoid a domestic recession in the run-up to his attempt at re-election.

In the event that the trade tensions persist for the remainder of the year, they are likely to have a damaging (if limited in GDP terms) impact on global growth, keeping central banks ready to ease policy. However, the US approach should ultimately result in a better trade deal that puts China on a more level economic playing field with the rest of the world, not just with the US.

Despite the trade risks, many of the growth opportunities in the EM universe for the next decade are coalescing around the two EM giants, India and China, and it is important to consider how to navigate these markets within an EM allocation. EM bonds, meanwhile, are benefitting from drivers such as the index inclusion of Chinese government bonds, but must contend with continued US dollar strength and higher oil prices.

Despite US tariffs on Chinese goods, China is now the largest economy in the world on a purchasing power parity (PPP) basis – 18.7% versus 15.2% for the US. According to the International Monetary Fund, China’s 2019 expected GDP growth is likely to contribute over 34% of the 3.3% expected world global GDP growth in 2019, more than three times that of the US, and perhaps more in 2020 when global GDP is forecast to reach 3.6% (see Figure 1).1

While Chinese growth is forecast to fall to 6.1% in 2020, this is still double the level of expected global growth and higher than EM growth as a whole (4.8%). India is also a key contributor to global growth, with 7.5% growth projected for 2020, up from 7.3% for 2019. If you remove China and India from the EM basket, real GDP growth for the remaining EMs is roughly 2.5%, barely above the combined figure for developed markets (DMs). 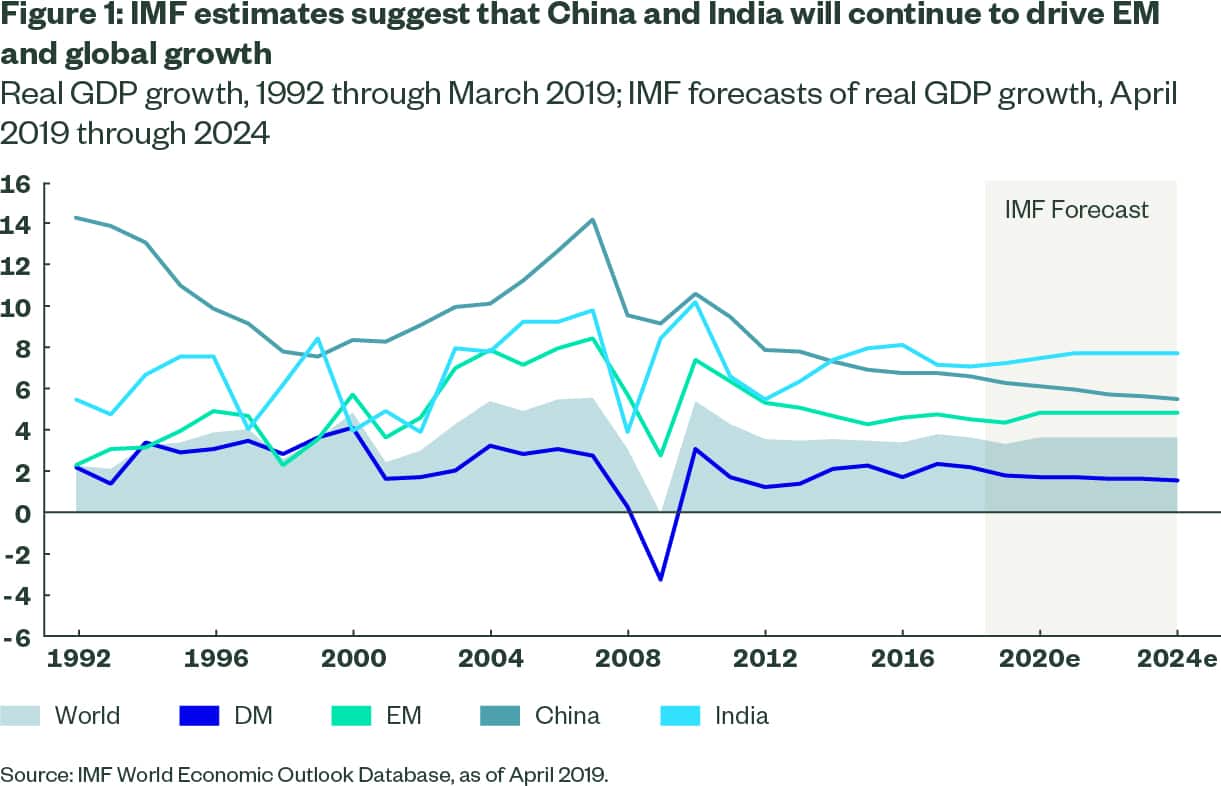 While this growth trend in the two largest EM economies may continue, it could take time for this to translate into investment returns. The rally so far this year has been driven, as elsewhere, more by multiples than by earnings, and remains exposed to trade conflict. Consensus forecasts for earnings-per-share (EPS) growth have been revised down from 8.9% at the end of 2018 for the MSCI EM Index to 6.7% for 2019, although current expectations have moved higher from a February 2019 low of 5.8%.2

India’s weighting in the index is one third of the size of China’s,3 and India is likely to see outflows from some of its biggest names as more China A-shares join. Therefore, investors looking for greater exposure to a faster-growing India may wish to take an active stance on EM equity to increase their weighting and benefit from variations in returns across different EMs. 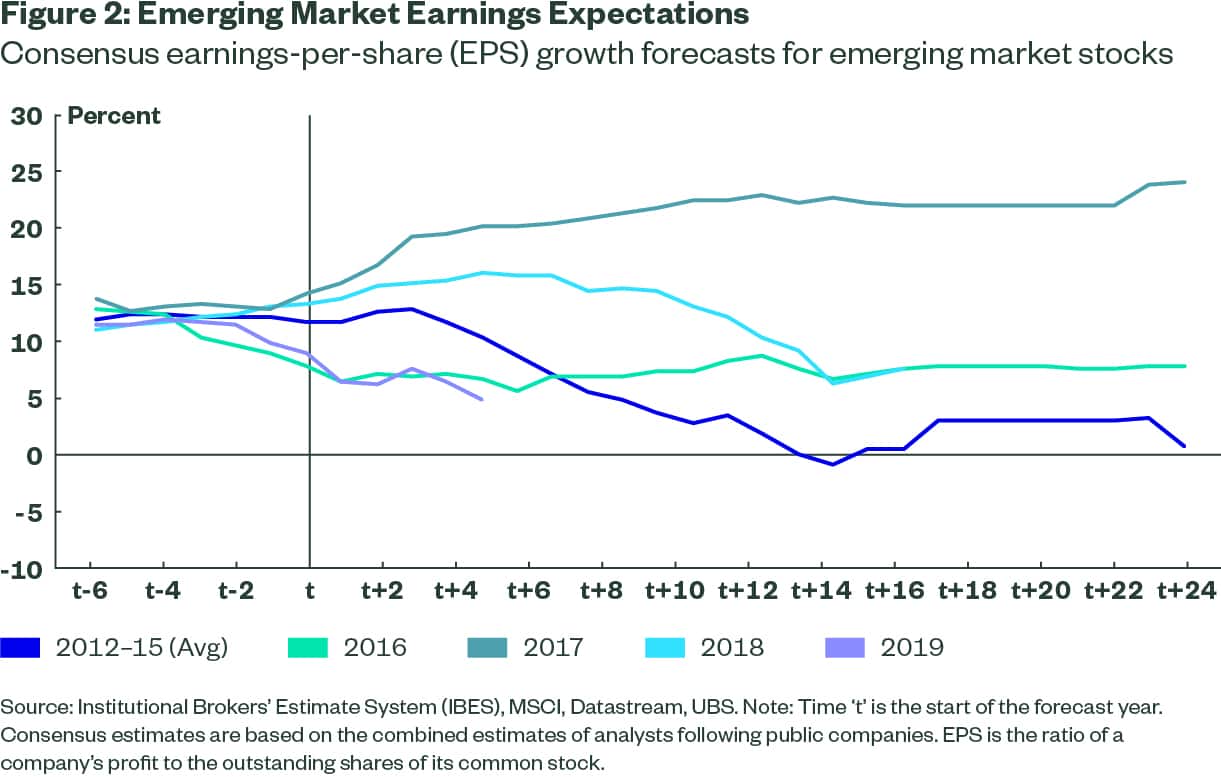 Within EMs, the IT sector (the only sector expected to see earnings decline this year) has been the main driver of lower earnings estimates, with EPS growth expected to fall 29%.4 The decline in the semi-conductor cycle, compounded by the downturn in global trade, has hit countries such as Korea, resulting in a sharp decline in EPS estimates for the country in 2019. Taiwan, another big player in the tech sector, is also expected to see earnings decline, by 1.9%, this year. In our view, this could open up some good value plays, given the still-impressive growth potential for big tech names as disposable incomes rise and domestic consumption grows. Brazil is the only major market with sizable earnings estimate upgrades in 2019.

In our view, the pessimism around prospective earnings for EMs this year may be overdone given the likely impact of more accommodative policy around the worldand the latent impact of Chinese fiscal stimulus. EM exports have yet to recover from last year, however, and may continue to be depressed by the trade conflict. Weakness in global industrial growth and demand for electronics such as smart phones may be nearing a bottom. Forward valuations are at, or slightly above, long-term averages, so steady and strong earnings growth over the next six to 12 months is necessary for EMs to hold onto and add to recent gains.

As became clear in May, markets had grown somewhat complacent about the potential impact of trade risk. Since then, this risk has been re-evaluated. Many observers still expect the US and China to find a way to co-exist peacefully but the changing nature of the relationship between these world powers means it will likely remain a latent threat for years to come.

Despite the recent shift in Fed expectations, lower US Treasury yields, positive Chinese economic data surprises, and a seven-to-eight-year US-dollar rally, the dollar remains strong relative to its history. For this to change, economic growth in the rest of the world, particularly in Europe, needs to recover. The eurozone went into a technical industrial recession in the second half of 2018, which has knock-on effects for EMs in terms of weaker demand for exports and smaller capital flows into EMs. While there are some signs of stabilization in Europe, the current outlook is poor relative to elsewhere. In a climate of a strong dollar, dollar-denominated debt obligations become more expensive and the weakest areas such as Turkey and Argentina are often required to borrow more in hard currency than in local currency as confidence in their own markets wanes. Non-financial corporate EM hard currency (HC) debt is up by over US$2 trillion since 2009, pushing total EM HC debt to US$5.3 trillion in 2018.5

The strong US dollar combined with higher oil prices – denominated in dollars – provides a double hit to net importers such as India and China. However, the impact is greater for smaller economies such as Indonesia, South Africa, and Turkey. While China continues to face debt issues, we believe these are manageable and its consumption story remains intact. India, despite its infrastructure and employment challenges, has the potential to capitalise on its demographic dividend over the long term.

Risks remain for EMs, not least the threat of rising protectionism from DMs such as the US. However, we believe that the growth story in the two largest countries – India and China – continues to offer opportunities for investors in both the equity and debt space. Within an EM allocation, therefore, it is worth considering how best to gain exposure to these larger economies. In some instances, this may be better achieved through an active exposure, for example, with regard to Chinese companies geared toward secular trends in the domestic market that are under-represented in the index. In other cases, such as the sovereign bond market, the increasing inclusion of onshore Chinese bonds in major EM and global indices should bring easier access for global investors keen to benefit from higher-yielding government bonds that are more highly rated than the average EM sovereign.

The information provided does not constitute investment advice and it should not be relied on as such. It should not be considered a solicitation to buy or an offer to sell a security. It does not take into account any investor's particular investment objectives, strategies, tax status or investment horizon. You should consult your tax and financial adviser. All material has been obtained from sources believed to be reliable. There is no representation or warranty as to the accuracy of the information and State Street shall have no liability for decisions based on such information. The whole or any part of this work may not be reproduced, copied or transmitted or any of its contents disclosed to third parties without State Street Global Advisors’ express written consent. This document may contain certain statements deemed to be forward-looking statements. Please note that any such statements are not guarantees of any future performance and that actual results or developments may differ materially from those projected in the forward- looking statements. Generally, among asset classes, stocks are more volatile than bonds or short-term instruments. Government bonds and corporate bonds generally have more moderate short-term price fluctuations than stocks, but provide lower potential long-term returns. U.S. Treasury Bills maintain a stable value if held to maturity, but returns are generally only slightly above the inflation rate. Currency Risk is a form of risk that arises from the change in price of one currency against another. Whenever investors or companies have assets or business operations across national borders, they face currency risk if their positions are not hedged. Investing involves risk including the risk of loss of principal.