Our last note on the upcoming German election cautioned that the margin of error was very small and the outcome could deliver a surprise jolt to markets. Since then, although polling has become more stable, the uncertainty has continued to persist. This note identifies that the most likely policy ramification in any outcome is higher public spending and details the investment implications of such an outcome.

Based on our current view of polls, the ‘Ampel’ (Traffic Light) coalition looks the most promising (Figure 1). The Christian Democratic Union/the Christian Social Union alliance (CDU/CSU) has failed to recover in opinion polls, even though there are sufficient number of undecided voters who could potentially turn it around on election night. Assuming that the recovery of CDU/CSU fails to materialize, any coalition between the CDU/CSU and the Social Democratic Party of Germany (SPD) would mean the former would be a junior partner.

Since the founding of post-war Germany in 1949, the CDU/CSU has never taken a junior role in the federal government. And since German reunification, the junior party has lost an average of 4.2% in the subsequent election. For these reasons, we believe the CDU/CSU would reject any junior coalition role and take on the mantle of the opposition. By definition, this would eliminate the ‘Kenya’, ‘Deutschland’ and ‘Grand Coalition’ options.

But even the ‘Jamaica’ option would be hard to construct, given that the three parties would struggle to legitimize a government without the largest party (and the ostensible election winner) in parliament. The ‘Left Bloc’ option may also garner sufficient votes, but we remain skeptical that the SPD and the Greens would really have the appetite to break the precedent of not including the Left in federal governments. This leaves the ‘Ampel’ coalition as the most probable outcome.

An ‘Ampel’ coalition would take time to assemble as there are considerable policy gaps between the three parties and especially between the center-right Free Democratic Party (FDP) and the other two. Thus, a government formation could take several months and many policy areas could be condemned to status quo. However, the one glaring area of consensus is the need to raise public investment.

The Greens advocate raising public spending by €50 bn annually, whereas the FDP suggests targeting a level of public investment at 25% of GDP, which is roughly similar in terms of new spending required. Both parties agree on retooling Germany’s energy production, improving infrastructure as well as investing in digitalization. Germany lags in public investment compared to its peers and has only just begun to catch up. Consequently, a significant increase in German public investment is likely in the coming years (Figure 2). 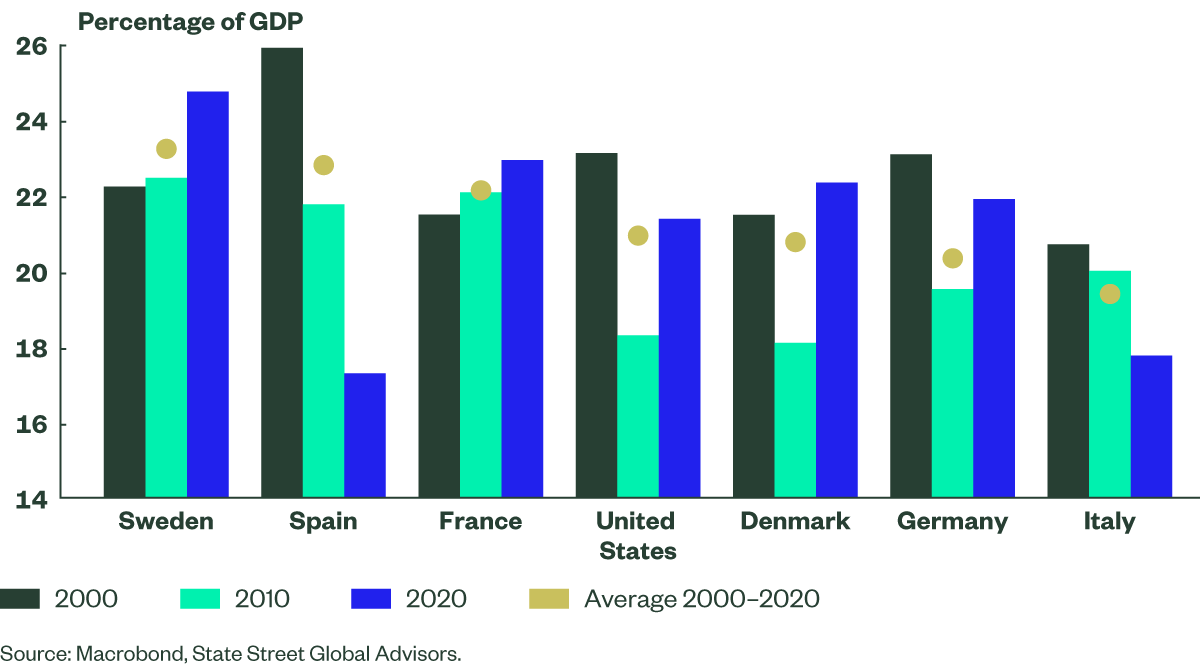 The other area of agreement is in climate policy. While the FDP would favor more market-based solutions, the Greens and the SPD would prefer to use government spending, guarantees or tax incentives to accelerate the transition. The result will likely be additional fiscal support beyond the explicit boost to public investment. While the de jure constitutional debt brake will remain in place, we do not expect it to constrain the widening of the net fiscal stance by at least 1% of GDP annually for the duration of the next government1.

This softer fiscal policy will have potent signaling power for the rest of the eurozone. Germany’s ability to rapidly balance its fiscal account after the 2009 crisis was one reason for the imposition of austerity across the eurozone. That policy mistake led to a deeper contraction, a slower recovery and an increased reliance on unconventional monetary policy across Europe until the COVID-19 pandemic.

The simple point here is that Germany’s easing fiscal policy may mean other eurozone members will follow suit. In addition, there are institutional angles as well.

First, the eurozone’s fiscal rules are due to be reformed in 2022, so some softening of the rules is to be expected under an ‘Ampel’ coalition. Second, such a German government is likely to support the institutionalization of the European Union (EU) recovery fund. While this was originally a crisis-fighting tool, it could morph into giving EU bodies more fiscal control, function as a high-grade borrower and facilitate fiscal transfers in the monetary union. Third, an SPD-led coalition is more receptive to progress on the banking union, which should strengthen the banking sector in economically weaker countries.

For all of these reasons, it is reasonable to expect a structurally wider fiscal stance across Europe, with many of the peripheral countries standing to benefit directly from more domestic spending as well as indirectly through stronger German import demand and lower risk premia.

More public spending will require larger public borrowing, which should apply to the EU as well as other countries in Europe. Consequently, the supply of high-grade sovereign bonds (both German bunds and EU bonds) is likely to increase significantly at a time when the European Central Bank should be stabilizing and gradually reducing its asset purchases. The combination should work to lift long-term yields across the euro area.

The availability of more safe assets and slightly higher yields should also make life a bit easier for European investors, who could be disincentivized to seek substitutes outside Europe. This means, there would be fewer capital outflows from the eurozone, possibly augmented by official reserve holders adding to their euro exposure.

This is all a net positive for the trade-weighted euro’s exchange rate. Sovereign spreads across Europe should remain range-bound in such a scenario, aided by the slight pickup in growth prospects. The latter is probably too little to factor meaningfully into equity prices. But the presence of the FDP in the German government should remove worries about future tax increases on German corporates, so there is little room for downside policy risks either.

A surprise comeback for the CDU/CSU and an alternative government coalition would diminish the effects described here but would probably not change the direction of travel. In contrast, a ‘Left Bloc’ coalition would amplify the effects, but German equities could be penalized given increased tax and regulatory costs.

1A 2009 constitutional amendment designates that the German government’s structural deficit be limited to 0.35% during times of economic expansion.

The views expressed in this material are the views of Elliot Hentov through 09/22/2021 and are subject to change based on market and other conditions. This document contains certain statements that may be deemed forward looking statements. Please note that any such statements are not guarantees of any future performance and actual results or developments may differ materially from those projected.