US Elections: What to Watch From Now to Inauguration Day

Following the US elections, we continue to monitor the post-election political landscape, especially in the context of the incumbent refusing to accept the popular verdict and the control of the US Senate still not being a foregone conclusion.

Expectations continue to coalesce toward a split government – one with a Biden presidency, a reduced Democratic majority in the House and, as of now, a Republican-controlled Senate. Investors reacted favorably, appreciating that the election process took place without major incidents and presuming that the lack of a “blue wave” meant that big-ticket Federal spending and an overhaul of tax policies were unlikely. We agree and are also watching several subsequent developments that could trigger revised expectations and potential market volatility.

The most effective legal strategies take place prior to vote tabulation. Once votes are tallied, it is exceedingly rare to have courts overrule the result unless there is evidence of systemic failure or wrongdoing. Thus far, none of the legal submissions seem to carry credible evidence and are therefore likely to fail.

Similarly, statewide recounts typically average vote changes in the triple digits, with 440 votes being the largest recount that flipped a Senate seat (Minnesota in 2008). No state-wide recount has ever overturned a five-digit margin, which is what separates Joe Biden from Donald Trump in three states needed to change the overall outcome.

Nonetheless, President Trump’s approach to the election outcome matters in the short term. First, his actions could still deliver downside risks to the transition period in terms of a policy surprise. Second, he was successful in boosting Republican turnout at the polls, helping his party retain or even gain seats in most federal- and state-level bodies. Hence, he could influence the outcome of the Georgia Senate runoffs 1.

Georgia Run-offs Matter to Limit Tiebreakers in the Senate

Republicans have historically outperformed in the runoffs and have widened their margins in each of the statewide run-off elections since 2006 (Figure 1). While the margin is getting tighter, they still added an average of 2.4% margin in the runoffs two years ago and is expected to do so this time around as well. They also just need to win one of the two Senate races that are slated to happen in Georgia in January 2021 to retain Senate control. 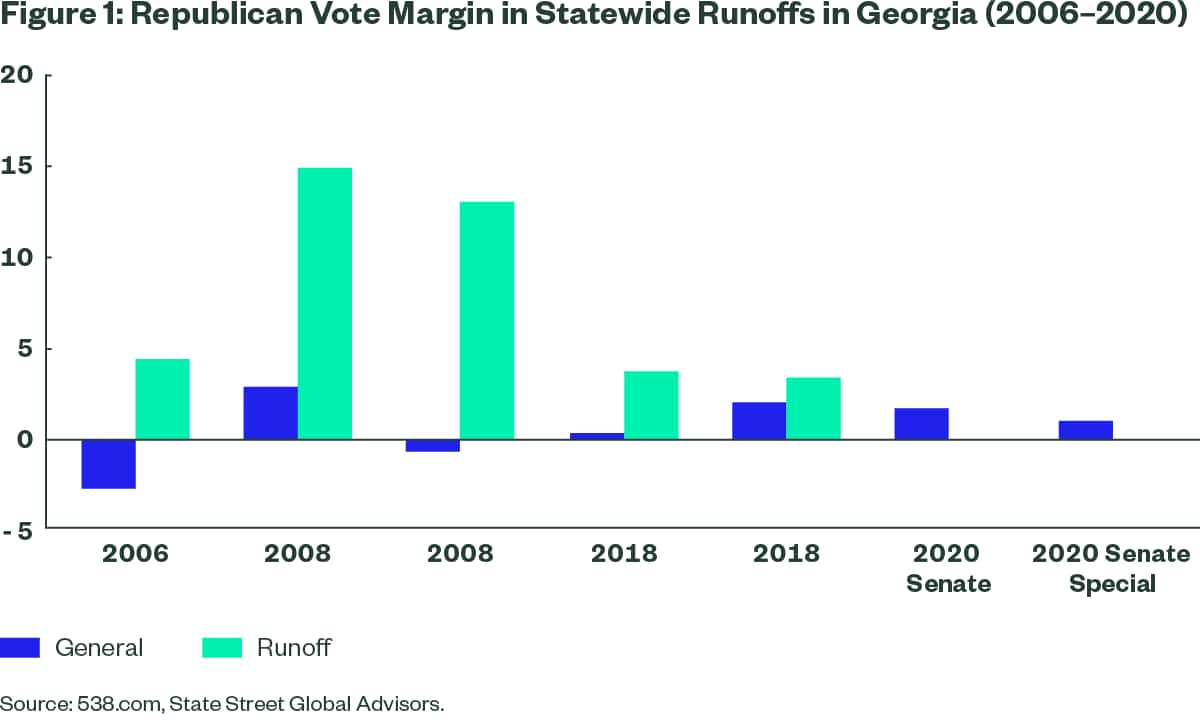 In the event of Republicans losing both the elections, vice-president-elect Kamala Harris would cast the deciding vote in circumstances where the Senate vote fell along party lines. To be sure, Ms. Harris was one of the most leftist Senators based on bills she sponsored from January 2015 to November 2020 2, another reason Republicans will be very determined to win the runoffs.

Stimulus From the Lame Duck Session

The current wave of coronavirus in the United States (US) will have a definite impact on its economy over the final weeks of 2020. In this context, a new relief package will be needed before year end and both parties will have strong incentives to support the economy post elections. We therefore expect a smaller-but-sooner support package approximating US$1 trillion – up from the US$0.5 trillion proposed by Senate Majority Leader Mitch McConnell but below the US$2.2 trillion sought by House Speaker Nancy Pelosi. Remember, this is on top of the US$3.0 trillion stimulus package passed by the Congress in spring.

Cabinet Picks as the Bellwether

Mr. Biden’s picks for cabinet and other top positions will be an early signal of his intention to pursue very progressive policies or occupy the center ground3 . Even if a bipartisan agreement indeed yields another stimulus bill, prospects of a future cooperation are by no means certain.

However, given that the Republicans are well positioned for the 2022 midterm elections and that there is a likelihood that Mr. Biden could just be a one-term president, there could be more bipartisan collaboration over the coming two years compared with the past decade. In particular, geopolitically tinged infrastructure spending plans could garner majority support in both houses of the US Congress.

Several decisions between now and Inauguration Day could upset investors’ apple cart and trigger volatility. Stepping back, responding to the pandemic is most critical in the context of cases continuing to rise up. A failure to signal imminent fiscal relief would exact a near-term cost, despite the emergence of potential vaccines on the horizon. Longer term, investors may begin to fret that fiscal restraint no longer has any political constituency in the US.

1In Georgia a candidate has to secure at least 50 percent of the vote share to win an election. If the mandated 50 percent is not secured, the two candidates with the most votes qualify for a second round of election where they try again to gain the minimum vote share required to be declared as the winner. This election process, popularly known as a runoff, is slated to take place in George on 5 January 2021.

3By law, Cabinet nominations are confirmed by the Senate.

The views expressed in this material are the views of Elliot Hentov through 18 November 2020 and are subject to change based on market and other conditions. This document contains certain statements that may be deemed forward looking statements. Please note that any such statements are not guarantees of any future performance and actual results or developments may differ materially from those projected.