Global GDP is poised for a growth spurt in 2021. Although our forecast suggests 5.7% growth for 2021, the fastest since 1973, there are important nuances that complicate the story. For one, we should not confuse economic momentum and breadth with completeness. Furthermore, even as global GDP returns to pre-crisis levels, labor market recovery will likely take a more protracted course.

Following a 3.4% contraction in 2020, the global economy is poised for a sharp rebound this year. We expect global real GDP growth (purchasing power parity-weighted) to hit 5.7% in 2021. If this materializes, it would mark the fastest expansion rate since 1973 (Figure 1).

Figure 1: Poised For the Best Global Growth Since 1973? 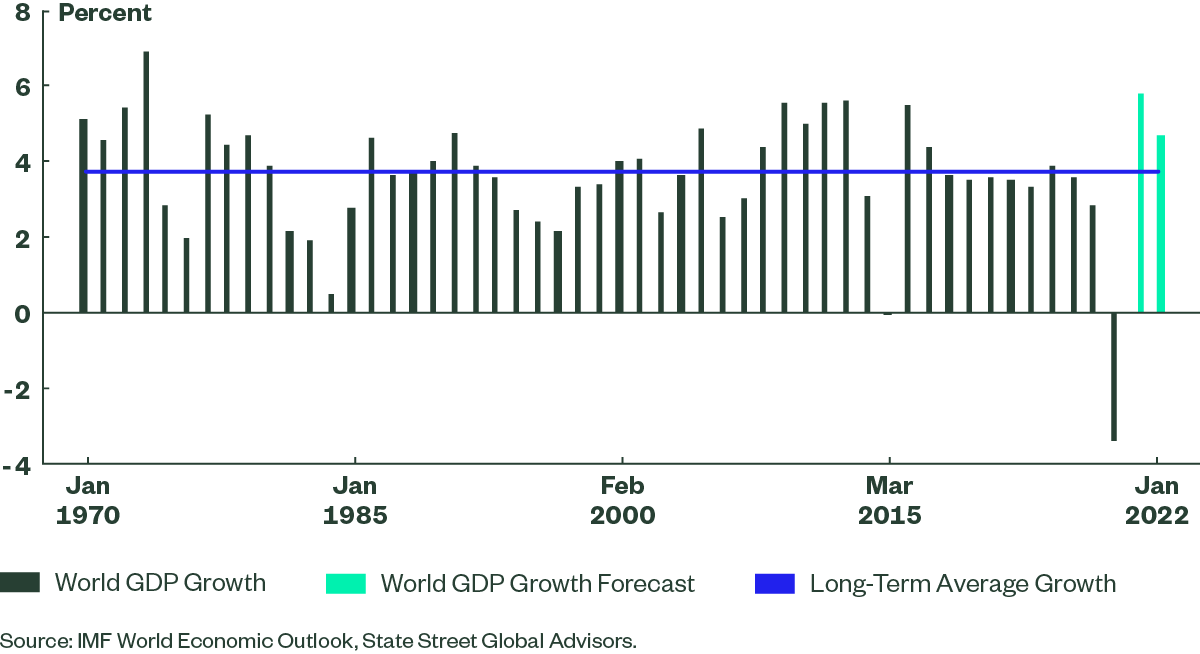 While the pace of vaccine deployment varies widely across countries, we believe these disparities will narrow substantially during the second half of the year as the frontrunners level off and the laggards catch up. This means, although a slow start to vaccinations will delay and likely handicap the recovery, it will not altogether preclude it. Therefore, we anticipate essentially all economies to participate in this upturn such that this global growth rebound will not only be fast but also broad. In some ways, this will be very reminiscent of the synchronized growth story of 2017, but in others, it will be quite different.

Indeed, we must not confuse momentum and breadth with completeness. For instance, only China has so far exceeded its peak pre-COVID-19 GDP – having done so in Q2 2020. The United States (US) and Australia are expected to cross that mark by mid-year, and Germany could reach it in the third quarter. But for many other economies this will not happen until late 2021 or, as in the case of Japan and others, until 2022. Thus, while in absolute growth terms this global rebound will look even better than that of 2017, the reality is much more subdued.

In this context, taking a two-year view should prove to be instructive. Between the fourth quarter of 2015 and the fourth quarter of 2017, for instance, China’s economy grew by 14%, the US economy by 4.8% and Japan by 2.7%. Based on our forecasts, in the two years ending Q4 2021, China and the US will have grown by 9.0% and 3.1%, respectively, whereas Japan’s GDP will have contracted by 1.9% (Figure 2). Context matters, and in 2021 in particular, it matters greatly. Beyond the two-year horizon, a permanent output loss due to the pandemic will be a long-lasting scar on the global economy.

There is another facet of the current recovery that warrants discussion, namely, the evolution of the labor market. Global GDP may return to pre-crisis levels this year or the next, but labor markets will take longer to complete that journey. Indeed, between the start of 2016 and the end of 2017, the aggregate unemployment levels in Eurozone, Japan, the US, the UK, Australia and Canada declined by about 5 million people. As we begin 2021, unemployment in these countries is up by 7.5 million compared with January 2020. To match the 2016-17 performance, we would need unemployment to drop by 12.5 million over the course of 2021, which is quite unlikely!

Therefore, while quite impressive, this year’s economic rebound will, by nearly all measures and for nearly all countries, represent an incomplete recovery from the severe COVID-19 induced recession. It is important to remember this since many equity markets are close to or have already made a full recovery to pre-pandemic highs.

The views expressed in this material are the views of the Global Macro and Policy Research team through 05 April 2021 and are subject to change based on market and other conditions. This document contains certain statements that may be deemed forward looking statements. Please note that any such statements are not guarantees of any future performance and actual results or developments may differ materially from those projected.